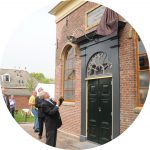 His history study at the university of Jerusalem contributed to Noah Benninga's notion that everything is a process of formation. His love for his grandfather and grandmother Benninga from Groningen played a role, but also his childhood during which he lived alternately in the United States and in Israel.
The future is unpredictable and Noah becomes fascinated by the hidden side of everything that appears before him. For example, he values his collection of birth spoons more than the gravestone of his great-great-grandfather Noah Benninga at the Jewish Cemetery in Winsum, because his great-grandfather never had a gravestone being killed in Auschwitz.
Like a professional translator Noah asks at the start of the interview how many words the interview may contain. “Two thousand? Oh, we will be finished in ten minutes”.
It will be ninety minutes and after finishing we walk over to his grandaunt Sara Tromp-Frank (the sister of grandmother Benninga-Frank) who lives one block down. Sara, who is 102 years old had a mild seizure yesterday. Reason why she will not be able to join the opening of her exhibition in Arte et Amicitiae, the historic artist club at the Rokin (in Amsterdam).

Tomorrow your family from Israel will get together in Amsterdam for the exhibition of your great-aunt Sara. Will you join, Noah? And when did you arrive in Amsterdam?

I arrived three days ago. I left at 4 am in the morning. First with a cab to the airport in Tel Aviv and then for the first leg to Istanbul. We had a delay there, which meant that I finally arrived at my hotel in Amsterdam by 5.30 pm. At the hotel they had a bicycle reserved, which I took to go to my aunt Sara. I am here now in part to visit my family and in part for my work in Jerusalem.
My job is 'academic secretary' at the Centre for Research of Dutch Jewry at the Hebrew University. At the CRDJ studies are conducted in history, culture and traditions of the Dutch Jewish society. Here in Holland the Manasse Ben Israel Institute does similar research. Different than in Holland is the fact that being Jewish with us is not an issue, because everybody is Jewish. Over there we are not a minority and that makes it more difficult to come up with research subjects that are relevant for the people (of Israel).

What do you remember from your childhood years? Did you live your entire life in Israel for example?

No, I was born in Philadelphia (USA) and lived during the first five years of my life alternately in the USA and Israel. I was so to speak like a suitcase that was moved from one house to the next. The ever-changing living places had to do with the labor contract my father had with the university (where he worked). I remember that as a child I loved to play with my tin soldiers, I loved cats and I loved reading. I also enjoyed Star Wars very much.
My parents met each other during their student years in Michigan. My grandfather and grandmother Benninga immigrated in 1954 with their four children from Holland to the United States. My grandfather Benninga was born in Eenrum and my grandmother in Groningen. Their eldest child (my aunt Channa) was born in Leeuwarden shortly before the start of the war, my father Simon shortly after the war in Eenrum and my two uncles, Jacques and David, in Arnhem. The family moved to Asheville (North Carolina). There my grandfather worked as a chemist for the American Enka Company. In 1965 they became US Citizens, except for my grandfather Noah.

Do you still feel connected to the gravestone of your great-great grandfather Noah Benninga at the Jewish Cemetery in Winsum?

Not really. We do have the same name, but I rarely go to Groningen because I do not live in Holland. When I am in Holland I go most of the time to Amsterdam (to visit people who are still alive). The last time I was in Groningen was in 2012 and of course I visited the province interior sometimes.
It is interesting that from the start of the eighteenth century six generations of Benninga's lived within the province of Groningen. Alternately with the first name of Noah or Simon. This tradition could have developed earlier, but there is no additional information available. At any rate my grandfather was the last one of the Benninga's in Groningen. During the war he fled to the Dutch East Indies together with my grandmother, their little daughter Channa (my aunt) and the mother of my grandmother (Anna Frank).

From all of the Benninga's from Groningen a quarter survived the Holocaust. Three quarter was killed. All those names and the monuments... the letters from my grandmother from Groningen put me on a different course. Because of that I started searching for the story behind it. Later, of course, I combined this with my history studies and my interest in the history of philosophy. That is why I am able to work now at it, in a for me new, different way.

My grandfather Benninga passed away in 1993 in Asheville. At that time I was fifteen years old. He wrote about his childhood memories in Eenrum and his war memories. These were published later in Holland. My grandmother felt that it was especially 'HIS-STORY' and wanted to tell also 'HER-STORY'. My grandmother was like a feminist. She started to organize her letters and I assisted her during the last couple of years. These are beautiful letters: little 'monuments', also about her family from Groningen. Her father, Zadok Frank, did not survive the war and because of these letters he became a real member of our family. Shortly after my grandmother's passing away we published “My Story” and there is still a version available that can be downloaded.

What is keeping you occupied the most at the moment. And how do you manage to not get too involved with the dark days of the Holocaust?

Not too long from now I have to turn in my thesis and defend it. It is about the belongings of the Auschwitz' prisoners, a subject that deals with the 'culture', behavior and double standards amongst the prisoners. Beyond that I am preparing a post-doctorate research subject and I am doing translation jobs Hebrew-English and vice versa. To relax I do fitness and write short stories. But despite of all of that right now I am in Amsterdam. My earlier plans were to go in April, but my father pushed for all of us going together. This has especially to do with the health status of my great-aunt Sara. My father will give the opening speech and despite the fact that aunt Sara will not be able to join, all of us are joining to take a look at her paintings and will ask the guests to write something in the guestbook. Sara is already looking forward to it now.

Ed.: Sara Tromp-Frank passed away several weeks later on en has been buried in Israel > In Memoriam 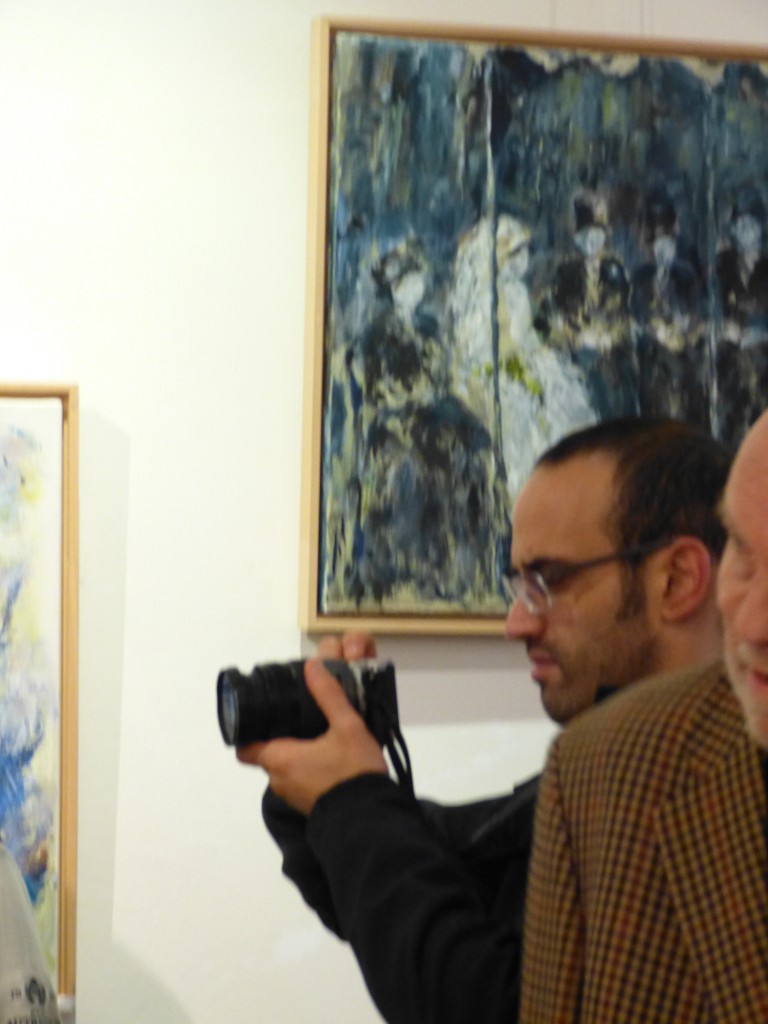 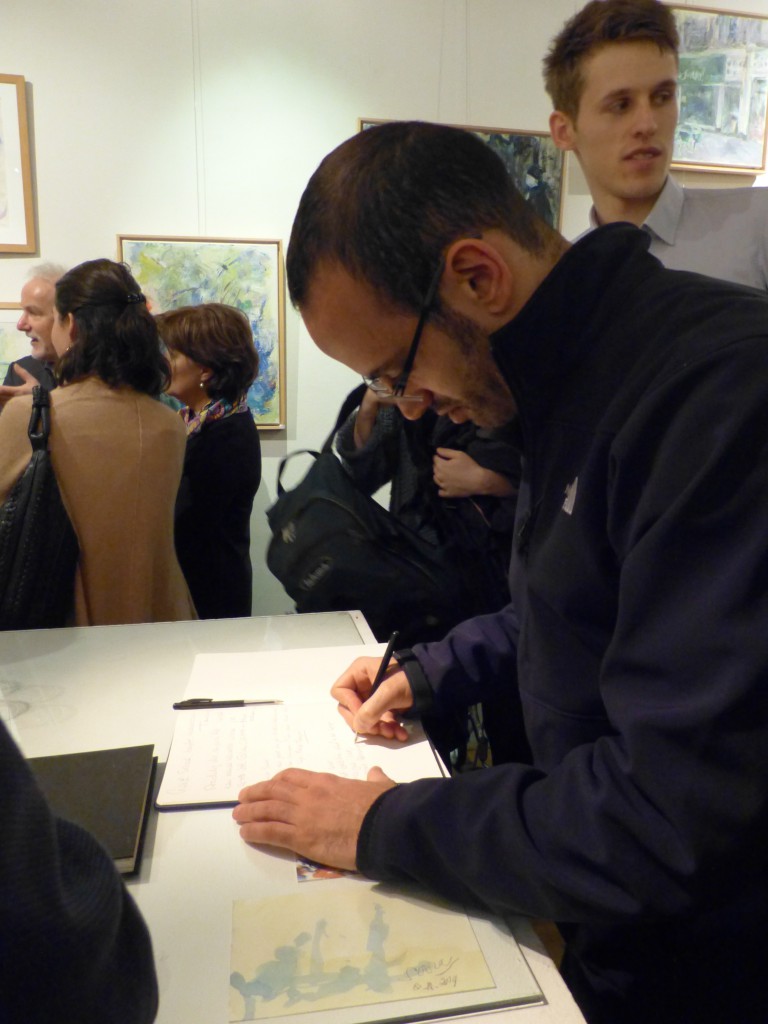 The mother of my grandmother (and of my great-aunt Sara) is Anna Frank. After the war the center of the family developed around this old mother in Hilversum. She passed away in 1979. After that my family kept visiting my great-aunt Sara in Amsterdam. She married the violinist Sam Tromp after the war. Starting from my very first year of age I visited them in their home in the Bronckhorststraat almost every year during vacations. It is like walking into memory lane to walk into that street from the Roelofhartplein. As a child a loved reading comic books during visits. We bought them at what you call the ‘cigar’-shop. Spiderman was my favorite.

Since we are sitting and talking here (in the activities space of the library) the large easy chair next to the window makes me think of the old one of my great-grandfather Zadok Frank, whom I have never met, because he was killed in Auschwitz. During the war all of my grandparents furniture was in storage in Groningen. The warehouses were bombed, but their belongings stayed unharmed. After the war Zadok's chair went to Anna Frank in Hilversum and after she passed away my father owned the chair. This way Zadok's old easy chair ended up with us in Israel. Once I was seated in the chair. I felt with my hand between the seat and the side. This space is quite deep. I retrieved a silver birth spoon with the initials of my great-grandfather Frank. This was the first piece of my collection. His birth spoon is hanging on the wall of my study in Jerusalem next to one of my grandmother.

With your background as an historian how do you view the future?

I find this a confusing question because the past is not an unambiguous notion. I rather look at it as a process of formation and that is why I give as an answer a quotation from Jacques Lacan. This shows accurately what my thoughts are and shows as well how the past and present can be intertwined.

Lacan was a well-known psychiatrist in Paris and a controversial thinker. Together with Sigmund Freud and Carl Gustav Jung he is regarded as one of the most important psychoanalitics of the twentieth century. The quote is from Ecrits: A Selection (New York: Norton, 1977):

“What is realized in my story
is not the past definite of what was, since it is no more,
or even the present perfect of what has been in what I am,
but the future anterior of what I shall have been for what I am in the process of becoming.”